Ecoturism in one of the most beautiful parks in all Colombia.

Every area of this fantastic park is protected and have different features. We recommend to plan your visit in advance having into account the following:

Where is Tayrona Park? Which is its location? The Tayrona Natural National Park is located at 34 kilometers from Santa Marta, in Colombia, in the Magdalena region. 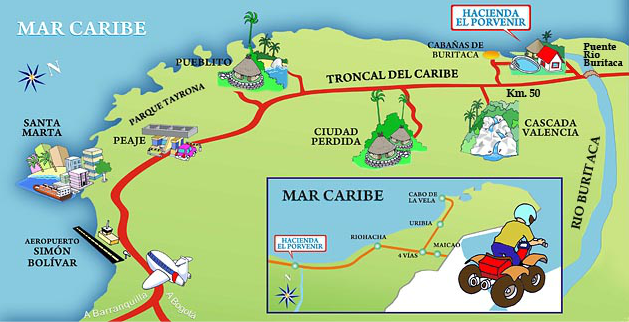 The Sierra Nevada de Santa Marta is the mountain by the coast higher in the world, it makes part of the many atractive points that offers the Tayrona Natural National Park. It is also the habitat of a great variety of species that lives in the different areas in several thermal levels from the sea level to the 900 meters high. The area is about 15,000 hectares, 3,000 of them belongs to the marine zone.

What to do in Tayrona Park? What you must visit.

The Tayrona Park is the place for watching and resting. This beautiful natural paradise offers amazing beaches of crystal waters: Chengue, Gayraca, Cinto, Neguanje, Concha, Guachaquita, between others. You can aslo enjoy another activities as long walkings, diving and the archeologic from the antique city of Tayrona Inhabitants.

The Tayrona park is ideal for nature lovers that wants to discover uniques landscapes, have a relaxing time, observing sunrise and sunsets and taking pictures.

Where to stay in Tayrona Park?

The best is that you have the option to stay inside the park in different and spectacular hotels, ecological cabins of all kind and budgets. In Cañaveral sector there are 14 ecohabs, with similar architecture of the antique indigenous town of Tayrona.

There are too another spaces as campings area, perfectly equipped to live an unforgetable experience. The Tayrona Park is one of the jewel of Colombian nature that you can’t miss, it is one of the touristic site of Santa Marta, ecotourism of the highest level where to enjoy not only the manglars beaches but lagoons or coral reefs.

The park counts with marvelous accommodations as the Ecohabs that are comfortable cabins with a design inspired in the nature and the landscape of the park. It also has a camping area in Arrecifes sector, signed paths, parking area, restaurants and an audience with a capacity of 120 persons.

Where to camp in Tayrona Natural National Park?

For adventurs, there are camping areas with all the facilities for up to 400 travelers in Arrecives and 200 in Cañaveral.

There are parking service in four (4) areas of the park in open zones not delimited, excluding 2 parkings in Cañaveral that are limited and have securitey 24 hours. There area also parkings in Bahía Concha, Gayraca and Neguane, managed by local persons that are in charge of the security.

Is there internet connection in Tayrona Park?

The internet service is only available in the Cañaveral sector, in the restaurant and the reception of Ecohabs there are 2 connected computers for the use the guests.

What must you carry to the Tayrona National Park?

NOTE: from april the 1st of 2017, it is necessary to have the yellow fever vaccine to enter the Tayrona Park in Santa Marta (Colombia).

Recommendations to go to Tayrona Park

When was the Tayrona Park created? On April 24, 1964, the region was declared a natural park to guarantee the reserve and conservation of the ecosystem, through resolution Number 191 of the Colombian Institute for Agrarian Reform – INCORA. Later this resolution was reformed by agreement number 04 of 1969 and approved by Resolution 292 of INDERENA the same year. In 1969, the 15,000 terrestrial hectares and 4,500 marinas were declared a natural park due to the great biological and archaeological value that they hold.

On the maritime edge of the park are distributed more than 350 species of algae while the terrestrial flora has more than 770 different species of plants. The dry forest of the park exhibits between half and a third of the plants, in comparison with the humid forests. The National flower is the orchid that is found in this area (Caribbean) This Park is characterized by its tropical landscape, coral formations, white beaches, rocky coastline, mangroves and lagoons.

The Tayrona National Natural Park is habitat for a great diversity of fauna species, as several groups of mammals and of these five (5) species of cats have been listed for the area: The Jaguar, the Ocelot, the Tigrillo and the famous Puma.

396 species of birds are reported, it stands out: The small tinamou, the king vulture, the sparrow hawk, the tick-footed falcon and the purple macaw.

Among the reptiles are four species of sea turtles and the snake Boa constrictor. Lately, the presence of the needle cayman has been reported, being the Tayrona National Park one of the few populations present in the Colombian Caribbean.

It is important the great diversity of marine species of the park, as molluscs, crustaceans, algae and corals, among others.

The hydrography of the Park consists of two drainage systems. The first is a set of small streams that flow into the Caribbean Sea. In the direction of the east, the flow increases gradually and becomes permanent. In the same way, the La Boquita, San Lucas, Cinto, Santa Rosa and Mason streams provide fresh water all year round. The second drainage system is continental, consisting of streams that flow into the Piedras River,  which the most significant is the Jordán creek.

Archaeological remains of the Park

In the area of the park there are archaeological ruins that indicate the existence of human settlements of the Tayrona tribe that occupied the region from pre-Columbian times until the colonization.

Communities that inhabit the Tayrona Park

The socio-cultural dynamics of the Tayrona National Park and its areas of influence make up a larger and more complex whole, which is the Sierra Nevada de Santa Marta.

The four indigenous ethnic groups that make up the Sierra (ancestral territory) with their coastal and lacustrine areas outside the reserves are: Kankuamo, Kogui, Wiwa and Arhuaco. In this ancestral territory there are sacred sites that must be protected and respected as part of the cultural heritage of humanity. In the surroundings of the Park, mestizos and Afro-Colombians live, who base their livelihood on activities such as tourism, fishing, agriculture and livestock.

The predominant climate in the park is tropical humid with temperatures between 25 and 38 ° C. It counts with rainy season and dry season being the first of them characterized by heavy rainfall and include the months of May and July as well as September and October. In spite of this, activities can be carried out without problems, since the rain is almost always fortuitous, which allows visitors to continue enjoying the beauties of the Park

How to get to Tayrona Park from Santa Marta?

In Santa Marta you must take transportation to one of the two entrances to the Park:

El Zaíno is the main entrance and is 32 km from Santa Marta, along the main road of the Caribbean in the direction of Riohacha. Estimated time in vehicle is 45 minutes. Through Zaíno you can reach Cañaveral, Arrecifes, Cabo de San Juan de Guía and Pueblito.

Palangana is at kilometer 5 along the main road of the Caribbean in the direction of Riohacha, where you can get to Neguanje, Gayraca and Playa del Muerto, “crystal beach”. In this area the visitor can only spend the day and has no accommodation to stay.

The entrance to Pueblito is by the sidewalk path at kilometer 20 of the road of the Caribbean in the direction of Riohacha.

What is the entrance Time to Tayrona Park?

The schedule of entrance and exit of the park is of 8:00 am to 5:00 pm, taking into account the walk that it is necessary to realize it is recommended to arrive before 3:00 pm.

For those who want new and surprising ecotourism experiences, Tayrona Park is a place full of myths and legends of the ancient communities that inhabited the Sierra Nevada de Santa Marta. There you will find archaeological remains of an immortal architecture and an exuberant nature.

For those who seek seclusion and relaxation, the Park offers magnificent beaches and the relaxing panorama of an intense blue ocean. Those who are attracted to more exciting activities can enjoy lung diving in Playa del Muerto “Playa Cristal”, Garnet and the Tayrona Natural Pool.

Other activities offered by the Tayrona Park: Hiking, Archeology, Wildlife and Wildlife Observation, Environmental Education, Bird Watching, Photography and Video, among others.

In Isla Aguja and Garnet you can practice autonomous diving and in Cañaveral, Arrecifes and Pueblito you can take walks, with the possibility of observing birds, small and medium mammals or simply enjoy the exuberant beauty.